ACTORS ENSEMBLE OF BERKELEY is casting for staged readings of three one-acts. The staged readings will be performed on the evening of November 18 and 19 with a Sunday matinee November 20th at La Val’s Subterranean Theater, 1834 Euclid Avenue, Berkeley, CA 94709. The performances will be hosted by the enigmatic and wildly entertaining Ginorma Desmond. The theatre is within walking distance (but it’s uphill!) from the downtown Berkeley BART station, just north of the Berkeley campus. In-person rehearsals will also be at LaVal’s. Stipend to defray expenses costs provided. Non AEA

Poof! by Lynn Nottage
Samuel has raised his voice at--and hand to--Loureen many times in the past. But this time, before her shocked eyes, he literally explodes mid-yell—poof!— his ashes falling into a pile on the floor, eyeglasses on top like a cherry. Loureen and her neighbor and good friend, Florence, debate what the hell to do next. From two-time Pulitzer Prize-winner Lynn Nottage, written when she was only 25, Poof! balances themes of domestic abuse and friendship in a way that’s funny and touching. Appx. 20 minutes.

The Killing by William Inge
Mac picks up Huey, a casual hustler, at a bar. But when they arrive at his home, Mac stuns Huey by revealing that he doesn’t want sex. He wants a very different kind of intimacy: assistance with his suicide. This play explores themes of loneliness, despair, and religious guilt. Warning: a gun does what guns do. Appx. 20 minutes.

Our Man in Madras by Gert Hofmann
Madras has suffered a catastrophic environmental event, and Bob, a contractor assigned to the area by a multinational corporation, is hiding in a cellar, hands burning, left ear gone, wife dead. Know who really doesn’t GAF? Mr. Sieg, who, in an increasingly unhinged phone call, threatens to fire Bob if he doesn’t work on his performance. The story exposes mind-bending corporate callousness in the face of disaster.

YOUR HOST:
Ginorma Desmond is a San Francisco based drag performer, appearing in plays, revues, traditional drag cabaret and stand up comedy.

AUDITION INFO
Please prepare and video a two-minute contemporary monologue, preferably with comedic and dramatic notes. Invitation only callbacks will be held at La Vals on October 12 If you are unable to record a video or need other assistance please email us at This email address is being protected from spambots. You need JavaScript enabled to view it. no later than October 10, 2022. To submit your video and (if you have one) resume, fill out this form: Audition Form here: https://forms.gle/EpnHQq3RXmnvMhsr9

Our Director, Tracy Baxter.
In recent years Tracy Baxter’s lifelong interest in all things theater has taken a more active turn. She’s completed acting classes at ACT, Berkeley Rep, and Cal Shakes, participated in directing and lighting design workshops at Oakland Theater Project, and performed with small but mighty community theater companies such as Theater of Others, Ninjaz of Drama, and the venerable Actors of Ensemble of Berkeley, where she is also a board member, and where she also just made her directorial debut, helming a gripping online production of Lynn Nottage’s SWEAT. Her play, KUDZU 2012, was a semifinalist selection in the Playwrights Foundation’s 2018 Bay Area Playwrights Festival and a finalist selection in the Screencraft 2020 Stage Play Writing Competition. Staged readings of KUDZU 2012 were presented in 2022 by the San Francisco Women’s Theater Festival and San Francisco’s 3Girls Theatre, where she is now a Brady Fellow, an incubator program for writers over 40. Actors Ensemble is the longest-running theatre organization in Berkeley, founded in 1957. We aim to produce quality theatre emphasizing the ensemble, with a community flavor.

Actors Ensemble
P.O. Box 663
Berkeley, CA 94701
This email address is being protected from spambots. You need JavaScript enabled to view it.
www.aeofberkeley.org
A 501(3)(c) organization 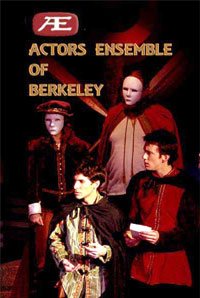